Your donations help us to keep the gardens going. If you would like your donation to go towards something in particular, please add a note in the message field. 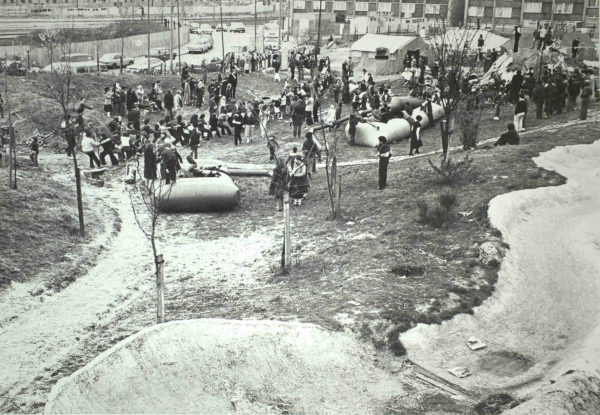 It was called “Meanwhile Gardens” as an act of defiance.

Jamie McCollough, who was the artist, engineer and visionary who founded it, struggled to get all the permissions, paperwork and money to transform this derelict, fenced-in land in what was then North Paddington into a garden for the whole community. Grudgingly, the council - the owner - said that they had no current plans for the plot. This was 1976, the year of our bail-out from the IMF, of black-outs, of rising inflation and unemployment. It was a period of national hopelessness, and the area around Meanwhile was, as it is today, one of the poorest in the country. (We are less than 2 miles from Grenfell, and much of the immigrant and working class community that was devastated by the fire has roots and family in the estates around the gardens). After much badgering, the council said that they might want to do something with the land in the future, but meanwhile, Jamie might as well go ahead.

So grabbing what he could and basing the whole project’s identity around taking what you can, he brought people around a common vision. As they worked to transform something derelict into something cherished, Jamie called it “Meanwhile Gardens”. Jamie wrote a book about the transformation - all the tensions, all the effort, all the victories and all the disappointments. What seeps from every sentence is the power of the vision to bring together a community. 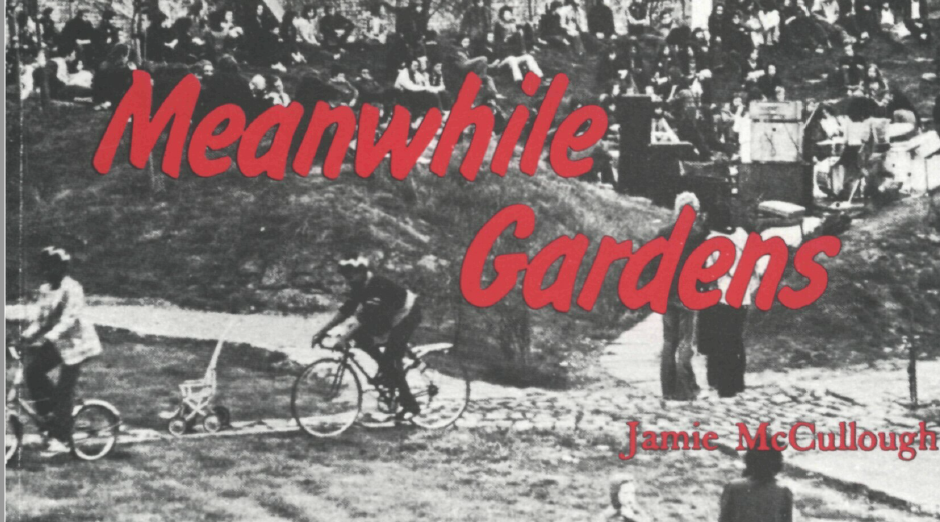 From the cover of Jamie’s book

A few years later, Channel 4 commissioned a film of “a year in the gardens” (you can watch it here - https://www.youtube.com/watch?time_continue=17&v=keNKnsQE848); it is clear that the gardens are still performing this role of bringing everyone together - building, dancing, sledging, biking, young, old, couples in love, snow, summer festivals, planting... What is striking about those images from 1981 is that races, ages, religions and classes all come together in a common project. Again, remember those times - some of the most divisive we’ve known in recent history. But here was a project that flew in the face of the reductive and divisive views of the time: yes, everyone had “got on their bikes” and created something through hard work; but they had done this together, collectively, and for the common good. Just as Meanwhile Gardens fused together the rural and the hyper-urban (it lies at the foot of the Grade 1 brutalist masterpiece that is Trellick Tower), so it fused together all the best of society. Acting together, initiative, and the common good.

It is no surprise that it’s a garden that brings together so effectively. It requires constant attention and care. But it repays with ever-changing beauty, a space for the best moments of city life, snatched from the pressures of everyday struggles, of meetings, and where the work of a community can be seen to produce something new every season. Think of what Jamie created as a popular artwork - the transformation of an absence of care and attention, of nothingness,, into something that has invited those around it to continue to improve it, enjoy it, and feel a part of it.

An impermanence hangs over the garden still. The council eventually granted a lease on one part of the garden in 1999, but an essential piece of land, on which we have a building that serves the project, was not part of the council’s grant. We have been in that building - “the Factory” - but without any tenure since we first occupied it in the late 1970s. We continue to be “Meanwhile”...

Transforming the land and making a garden, 1976. The Factory Building in the background.

Of course, the council now see this plot of land as having huge money value. But the community has used it as a base for over 40 years. Local schools use it to bring tomorrow’s ecologists and botanists for an afternoon of planting or pond-dipping. The local steel band, the Metronomes, use it to rehearse and to train a new generation of Caribbean musicians. Volunteers, many of them going through hard patches in life, use it to shelter from the rain at lunchtime when they are working in the gardens… But without a lease, we cannot raise the charitable funds to repair the building, so it is gradually becoming more and more dilapidated.

Perhaps the council hope that the leaking roof in the rain will eventually drive us out, and then they will be able to realise the plans they have drawn up for the site, which mainly involves flats, with a minimal few thrown in as social housing. We are firmly resolved against this as a plan for the site.

The public space in this part of the borough is becoming more and more gentrified - Portobello Road is morphing into bijou shops and branded coffee shops; Golborne Road, with its traders, middle eastern and Portuguese communities, is following suit. As space that really reflects the spirit of the residents of the neighbourhood disappears, those residents do not. They continue to live in the high-rises and estates. We cannot have public space designed only for the very well-off just minutes away - in the divided society we live in, we need spaces that truly bring people together in common causes, activities and everyday pleasures.

The aim of our campaign is: to secure the lease on the building that will allow the gardens to continue to be a centre of community effort and enjoyment, to continue to combine the spirit of autonomy, inclusivity and of collective work that founded the garden. North Kensington is one of the most desirable neighbourhoods on the planet … but only because there was a community spirit that created it. It must therefore be given the space to flourish if the neighbourhood is not to become another identikit site of gentrified opulence.

The whole community has come together to develop an inspiring and achievable vision for the gardens and the Factory site - which matches the ambition of the original vision.

The detailed plans will be presented to the council in the autumn together with a demand for the lease that allows this vision to become a reality. Our proposal is so compelling that we are daring the council to say no. If they do say no, they will face the spirit of the community that has built, maintained and protected this delicate, precarious. resilient and strong space for 43 years.